#DearVA Why Must Getting Much Deserved Help Be So Difficult?

#DearVA,
Why must getting much deserved help be so difficult? And why must it be a billion times more difficult on a weekend/holiday? Our men and women who have fought so hard for you and your staff to have those days off (or to have those weekend/holiday jobs rather than no job at all) didn't take time off and say "we'll fight again on Monday". Their injuries, crises, worries and fears don't take a day off. So tell me, why is it so difficult to get real honest to goodness help, often times being turned away anyway all while begging for care?
If the #NewVA really wants to prove itself, HELP. Staff Emergency departments with capable staff who's first inclination when a warrior comes in begging to be safe, asking to be admitted for thier safety or the safety of others, is NOT 'the E.R. is closing soon for the night' or 'how quickly can we send this man home?' Staff it with doctors who READ (and dare I say, know how to pronounce) what medication the patient is on or if they have a history of self harm or what invisible injuries they have been diagnosed with-and without dismissing those invisible injuries as 'just anxiety' or 'needing to chill out'. (yes, #VA, I have heard one of your doctors say those exact words while a Veteran was asking for help after reliving a flashback) How about also making sure that when a patient comes in with a caregiver that he understands that we as caregivers know more about that Veteran than the attending doctor will probably ever know. Please make sure that they know that we would rather not see the ones we love and fight so hard for being told that the problems they're experiencing are minimal. We wouldn't be there if they were, we wouldn't be fighting so hard if they were .
#VA, it's time you honor your end of the bargain. They honored theirs, they served. It's time to live up to your promises to our Veterans, to care for them, to give them the dedication and services they so deserve. Show us, their families, them, that you can be a #NewVA.
Sincerely, DNE
~~~~~~~~~~~~~~~~~~~~~~~~~~~~~~~~~~~~~~~~~~~~~~~~~~~~~~~~~~~~~~~~~~~~~~~~

Today I would like to ask you... What steps are being taken to ensure that going forward medical records will not include claims that Vet's have cancelled appointments, when in fact, they have been patiently waiting for those appointments?

Let me lay out a scenario....
A vet addresses a complaint with his PCP.
He requests an appointment with the department best able to handle this (neuro, urology, orth, etc) and is told the appointment will be made and the Vet... is to be notified.
Calls are made, no appt on calendar yet.
Vet goes back to see his PCP, and the complaint was mentioned.
Clinician says, and I quote.. "It doesn't appear to be that big a problem since you were a no show for these appointments."
No appointments were ever actually scheduled.
Vet was never notified to report.
How is this conducive to care? How is this being addressed ‪#‎NewVA‬ I look forward to the new changes that will hopefully resolve situations like I mention here.
Thanks!
K.B

I don't have much to you to say today, my head is still spinning when I think back of all the things I read. However, I need to make it clear to you, here and today - look at this photo that I found online, it tells the truth of so many in regards to the injuries they have sustained that you can't see. When I saw this it made me think of you and the 10 yrs that had to go by before you stood and wrote it down as PTSD. For 10 yrs you lied and said there is nothing wrong with him but I stood by and saw the tears, the struggles and the pain. I was the one who has been living with bruises all over me because he would lash out in his sleep and deal with the horrors that he has seen. For many of those years we had to sleep in separate rooms or beds just to get a little rest. I still heard him scream each and every night, picked him up of the floor more then ones but all you said is that "he is fine" because you never would listen to me.
Again I am asking you now and here with the ‪#‎NewVA‬, PLEASE LISTEN TO ME!

Wife of a Veteran, Mom of 3 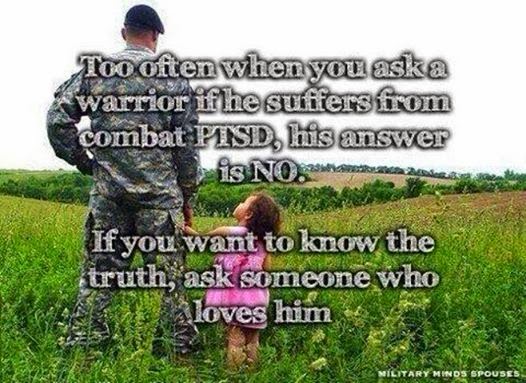