Our Story: It Just Means You're Human 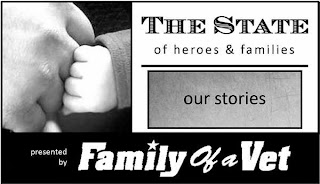 I was sitting in a postpartum depression therapist’s office downtown, cluster-feeding my new baby and talking a mile a minute. To be honest my mood was closer to manic than depressed. My daughter had a more-or-less wonderful birth, nursing was going great, and I was elated with my new role as mother. My husband, however, who had recently concluded his service in the army, had become completely psychotic. I had been handling all the domestic responsibilities since the grandparents flew home, in addition to recovering from the birth, and I was dealing with daily emotional meltdowns, freak outs, and dozens of random crises that arose when my husband would forget something, like paying a bill or making travel arrangements for work. I had no idea how to deal with this formerly rational, obviously hurting, good but now possibly dangerous man. During a pause in my very long distraught story the therapist said, “It sounds like your husband has PTSD.”

No way! PTSD was flashbacks, nightmares, crazy angry ranting--alright, he was doing the ranting, but he had no weird flashback-hallucinations and no nightmares waking him up. (He wasn’t actually asleep that often because our newborn was up all night fussing.) The therapist read the DSM entry on PTSD to me: (The DSM is the book they use to diagnose mental illnesses.)

Criterion A: Direct exposure to trauma. Check and check. My husband, let’s call him Joe, was deployed to both Iraq and to Afghanistan in the space of four years. He doesn’t like to talk about it much, but from what I have gathered it was unpleasant enough.

Criterion B: Intrusion symptoms. This is the classic flashbacks and nightmares that my husband wasn’t getting, but items 4 and 5, “intense prolonged distress” or “marked physiologic reactivity” “after exposure to trauma-related stimuli”--oh boy. Apparently women and children crying out in pain are a trigger for him. At around hour 12 of my daughter’s birth he was so angry that his whole body turned tomato-red. He started taking short breaks to go punch the car seats in our poor sedan. And the baby had been crying, sleeping or nursing in about equal proportions for the last two months. Joe was not taking it well.

Criterion C: Avoidance. When his daughter was two weeks old, my husband voluntarily took a new role at work that required 90-100% travel time. With his Reserves training, we only saw him three out of four weekends for the next six months.

Criterion D: There are seven items delineated “Negative alterations in condition and mood,” two are required for a diagnosis. I could see five, and couldn’t rule out the two that were about thoughts and feelings--it was hard to talk to the man about anything at the time, but especially thoughts and feelings. I would like to give as an example number 7, “Constricted affect: inability to experience positive emotions.”

There are zero pictures of my husband holding our new daughter, smiling and looking into her eyes, or holding her little hand, because none of that ever happened. When he wasn’t yelling at me and blaming me for everything from the price of oil to the hair growing in on his back, he was yelling about how babies are the most horrible creatures and it would be a blessing if the entire world went extinct. At the top of his lungs. While I was lying in bed nursing, too weak to get up to leave. Buoyed by those awesome nursing hormones, however, I was able to calmly and compassionately respond, to gently suggest that he was being irrational and self-contradictory, but I was promptly blamed for his state of mind, too. It was impossible to hold a calm conversation with the man for one full minute--completely impossible. What really broke my heart was that he saw our perfect little baby as the cause of everything that was wrong in his life, and wished she had never been born.

I’d like to take a paragraph here to mention the advice I got from relatives and friends on the occasion. My parents decided Joe was a closeted axe murderer now showing his true colors, and their bias against the armed services came out. They also suggested he might be mentally disabled, which is not true, the man is brilliant. Joe’s parents suggested that I was not being a good wife, and recommended several books on how to be more obedient. They also recommended that if I would stop nursing, and just leave the baby alone for long periods of time, it would eventually lose interest in crying. My civilian friends’ eyes sort of glassed over like they were embarrassed and bored at the same time, as if to say, “Duh. He was a soldier, what did you expect?” This PTSD thing was beginning to sound like a winner.

Criterion E: Alterations in arousal or reactivity, 2 out of 6 required for diagnosis--5 out of six, check. The only one he seems to have been spared is exaggerated startle response. He had the rest in spades: irritable or aggressive behavior, problems with concentration, sleep disturbance, self-destructive or reckless behavior, and hypervigilance. Joe still can’t sit with his back to a door or window without turning around in his chair, he would stay up until 3 AM playing games when he had to leave at 6 for work, and he was constantly angry and verbally abusive when he was home.

Criterion F, G, and H: Duration of more than one month, functional impairment, and not due to pre-existing illness, medication, or substance use, check, check and check. I was so excited to go home and tell Joe that my post-partum depression counselor thought he might have PTSD... OK not really. I knew that it would take luck, genius, and major karma points to ever convince him to go see a therapist. To talk about feelings. At the VA.

We had a lot going for us. Joe found a good contract job with a company that was recruiting veterans soon after his service ended. The team they put together was all young veterans, they all had the same breakneck work ethic and they outperformed other teams twice over at least, which allowed Joe to shine and be promoted. He was very supportive of me seeking therapy, we were able to afford it through our TAP assistance coverage, and I think it opened a door in his mind that therapy could be useful. I thank the Higher Powers every day that Joe’s self-destructive and reckless behavior (see Criterion E) didn’t involve alcohol or drugs, or even reckless spending. He played video games for hours, like 20 hours without eating, and then he was sleep-deprived and cranky and didn’t get up until three the next day. It really hurt that that was how he chose to spend his few weekends with us, but at least he didn’t physically hurt anyone, or get hurt himself.

Eventually I found the right words to say to him, with the help of the FOV website, an organization called Coaching into Care, a therapist I found through Military One Source, the chaplain at his Reserves Unit, and a fellow at the County Office for Helping Veterans Communicate with the VA. I think talking to that guy down at the County was the thing Joe really needed to hear--another combat veteran saying that lots of other veterans are having a hard time, and that it’s perfectly normal, not really even an illness at all, to have a stress disorder after experiencing enough trauma. It just means you’re human and you had some horrible experiences, and it would happen to any one of us under bad enough circumstances. And that therapy can help.

Joe went to see a few civilian therapists who had experience treating victims of rape and car accidents with PTSD, but their help was negligible to counterproductive. I kept telling him that therapists are just ordinary people and some of them are jerks--you have to keep trying them out until you find one that you get along with. It wasn't until Joe finally took that other veteran's advice and went to see a fellow at the VA that things really began to improve--and even then, not right away.

At first the man said Joe couldn't have PTSD because "educated people do not get PTSD." That was upsetting, and I encouraged Joe to consider how many alcoholics and cocaine addicts were working in the financial district (where I used to work,) in order to see that the therapist was not looking at the situation in the right light. Educated people can hide their problems because they often have a lot of money, lawyers, secretaries, etc. After that little hiccup they got along well. Joe found it much easier to talk with someone who had seen combat, and the therapist soon agreed that the problems Joe was having were related to the merciless training and work schedule, extreme violence and trauma, and lack of time to process and heal from those experiences during his service.

Joe doesn’t tell me what they talk about at those weekly meetings, but I’ve seen him walk away from a rant mid-sentence, retreat to the bedroom, and come back five minutes later to apologize. I nearly fell over the first time that happened! He rarely gets so upset that he yells now, and when he takes time out to relax and calm down, he goes on a walk or plays guitar rather than getting sucked into ten hours of computer games. He makes comments sometimes that tell me he is able to look at things from my point of view, shows patience and good humor when things are difficult at home and at work, and plays happily with our toddler for almost two hours at a time (and she is still a handful!) The counseling services at the VA have been life-saving, but I wish I had had more information about PTSD sooner.

I don’t think what happened to Joe could have been prevented by better screenings either during his service or when he came home that last time. In the middle of a stressful situation, and all four years of his service were a constant emergency, he is a rock--focused, effective, even compassionate when needed. It wasn’t until he was out, under all the low-level stresses of a civilian life, with time to reflect on what had happened and no outlet to talk about it, that he fell apart. Maybe the armed services should do additional screenings a year out. It would definitely help if more VA clinics offered group therapy for families of veterans. Families are dealing with PTSD, too, and they are more likely to be able to help their veteran get treatment, or to realize that he or she needs treatment, than a primary care physician who only sees the veteran once a year, if that.

Thanks for reading our story. No one deserves to suffer from PTSD without getting help--good, effective help. Keep looking for a therapist who isn’t a jerk--there are lots, and it really helps.

To learn more about the State of Heroes and Families project, please visit our main site or visit any of the following direct project links -

Email ThisBlogThis!Share to TwitterShare to FacebookShare to Pinterest
Labels: Coaching Into Care, Military OneSource, Our Story, PTSD, State of Heroes and Families