I want to start today's Monday Momism by clarifying that this post is not political/religious but rather my own feelings and experiences regarding what happened ten years ago.

Ten years ago this month, we went to Iraq. On a more personal level, my son and his unit went there. The irony is they weren't suppose to tell where they were going specifically but thanks to a media personality drawing into the sand, it wasn't long before everyone knew what was going on if they didn't already. From March, 2003 until my son came home over a year later, I spent every waking (and sleeping moment) in front of the news when I wasn't working, spending time with my two younger children or writing out on the front porch in case we got an unwelcome visitor bringing bad news. (I wanted to make sure one of my children didn't answer the door should that be the case.)

Before he left, we went to Ft. Polk to tell him goodbye. I already knew the situation. I had been on the phone with an operator because I got a “Mom” feeling and he told me that the unit had indeed received orders. This was before I spoke to my son. With just an hour's notice, I told the wonderful priest I worked for that I had to go out of town. Being former military himself as well as a man of God, he understood.

Before he left, my son gave his younger brother a sleeping bag and told his baby sister that the bear he had won at Six Flags two years earlier was now hers. He wanted her to watch over “Bubbie” Bear and told her the bear would watch over her as well. That very night while we stayed at a relative's home in Lake Charles, my younger son got the sleeping bag out of the car and slept in it. He did that every night over the next year. 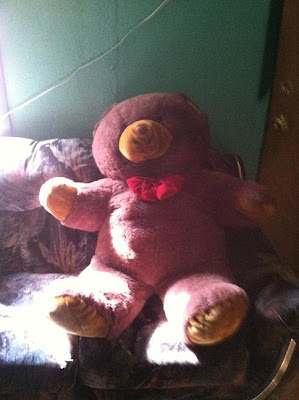 When we returned home, my daughter ran to the bear first thing and hugged it, telling Bubbie Bear that her Bubbie had gone away. She began her own ritual that night. She would hug the bear which was literally taller than her. She would whisper to it. I overheard some of her friends ask her one night why she did that. She told them so her brother could feel her hug across the miles.


What my children didn't know until the release of my book was that I had my own ritual with those two gifts from their older brother. I would go into my younger son's room and wrap the sleeping bag around me from time to time, especially when I would hear something heartbreaking on the news. The day I got one of my letters returned unopened I sobbed into Bubbie Bear's furry arms myself while the Red Cross worked to see what was going on because I had been told the recipient was deceased, yet my son's stateside unit had no information. It was a tragic error due to the loss of someone else's son with a similar name. Many times I learned and experienced survivors' guilt here at home.

Over the years I have taken Bubbie Bear to after-school events and children's church to share our family's story. This usually happens the week before Veteran's Day. They fall in loth Bubbie Bar just as our family has. Several have told me they can feel the love in his arms when they hug him as well.

Over the past few weeks, Bubbie Bear has comforted me tremendously. I have been experiencing memories dealing with my son's deployment ten years ago this month. I have completed a story for children that is fictionalized that I hope will help children dealing with the deployment of a loved one.

My son now has a four year old son. He hugs Bubbie Bear whenever he comes to visit and talks to him also. Bubbie Bear has truly become a member of our family and a wonderful support system in his own way.

If you are dealing with your own memories and feelings as the family member of a veteran, please feel free to ask us to help you find the right resources or someone to talk to. Whether you are a spouse, sibling, child or parent of a veteran dealing with PTSD and/or a TBI, we have been there and can help. We understand because we have shared your journey. Please contact us if you have any questions or would like to be a part of Family of a Vet.