The Love Letter Campaign ~ ...And This One Time At Camp Taji 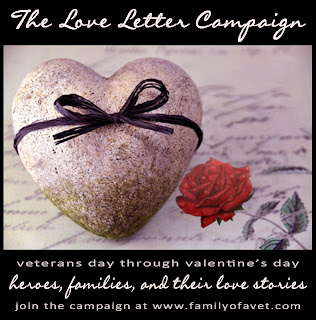 In Nov.2007,I had enlisted into the PAARNG.I came out of BCT/AIT in 2008 and deployed to Iraq. A fresh face not knowing anything but what I was taught in basic training. A start for a new life for me. I was assigned to A trp 2/104th cavalry through most of my deployment. We were an elite squad called TAC-B. Our daily mission was to carry 'brass' to meet with the Iraqi leaders,IP,IA, and such. Our main goals were to bring everyone home safely,and 360 security for the meetings. Our missions were an absolute success on a daily basis.

I was ate up like a soup sandwich when i arrived with TAC-B. I had just made E-3 the week before. I was left behind at the TAC office for the first 2 weeks of my entry doing details and odd jobs. My first mission outside the wire proved to be the most exciting thing I have ever done. Adrenalin pumped through every inch of my body, i was restless. I could not sit still at all and I was very edgy. Paranoia swept over me, I watched every person that looked at me. Day after day, I trusted nobody. I didn't even really trust my team, not that they gave me a reason not to. I performed my duty and performed well above what I feel that I have done. I really felt no accomplishment.

By the end of the first few months I was well adapted. Later I was told that I would be leaving the TAC and placed with my home unit until the end of it. I was told to switch housing units just before Easter. It was not far but just far enough. Saturday night I could not sleep at all. I was awake til daybreak. It was time for the mission, and we went and executed it perfectly. As soon as we got back in and geared down we had another order. I was empty I had no strength to pull through it. I asked my COC if I could go back and rest to be ready for the next mission. I got the go ahead and I went to my now relocated housing unit. That evening i was startled awake by the unit shaking, a loud boom, and a lot of people outside. I grabbed up my rifle and magazine and proceeded to load it as I was exiting my house.

Just as I pulled the charging handle back to go red, somebody stopped me and explained that a rocket exploded above us. I was somewhat relieved, I didn't know what was going on. I thought that our base was being taken over. Now that i was clear on the incident, I went to check on my 'battles' just a short distance away. I knocked on every door. Nobody was back from the second mission yet. I started getting nervous and worried that they were not back before dark. I went to the 1SGT to do accountability and broke into the TAC to wait. Around 0100 is when the PLT SGT came in. Everyone was back safe.It wasn't until a few days later that I had found out that shrapnel came through the roof of one of the neighboring houses and shredded the pillow of another soldier. We carried on the rest of the time in country. With 2 weeks left, I had been sent to my home unit in the EOD compound.

The return home was bitter sweet. I had returned to a hopeless situation I found myself to be more reclusive and depressed and I didn't want to drink. I was more aggressive and severe agitation. My anger had boiled over and threatened to tear me down. With debt, and no one to really turn to, also to find I had a daughter that was 3. To top it all off, my car had been wrecked the day before i got back to the States. I had just given up on it all. F** IT !!

I had NOTHING. One night I decided to take a trip that changed my life. During my last weeks I was chatting up with some people online, and the one in particular, was Katrina. I decided on taking a road trip to meet her in her mountain town apartment, and never looked back. Last year we were married. We have been struggling on and off for a while, but we are surviving as a family. BARELY

This blog post is part of The Love Letter Campaign... a project started by FamilyOfaVet.com to encourage those who love a hero to write a letter sharing their story (where they started, what they've faced together, and why their love endures). It's not just for spouses, but also for parents, siblings, caregivers, and friends. It's about telling the "rest" of our stories... stories that continue despite PTSD, TBI, and the challenges of life after combat. To share your love letter or find out more about the campaign, visit http://www.familyofavet.com/love_letters.html.
Posted by Aimee L. Taylor at 12:31 PM