Monday Momism: Another Day, Another Time

Tomorrow is the eleventh anniversary of one of the most fateful days in history: 9/11. Thousands of lives were immediately changed that day, quite understandably. Passengers on planes and their families, firefighters and police officers going into burning buildings, workers and visitors inside the Twin Towers and the Pentagon. It also marked the beginning of changes in families all across the country who had a loved one in the military or joining.

My son was already set to go to basic in three weeks when I woke up that morning. He had actually wanted me to sign for him 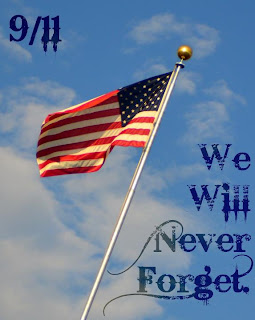 to go in when he was still 17. I remember sitting in the recruiter's office, pen in my hand and suddenly asking, “What if there's a war?” It was early June. The recruiter said “There's not going to a war.” My son has remarked several times that he thinks I must have had one of my “Mom” feelings that day. I set the pen down and told my son I could not sign because if something ever happened to him, I wouldn't forgive myself. A few weeks later, he joined on his 18th birthday.

In less than two months, I got a phone call from my brother. He was working and had heard about a plane flying into one of the towers. I was getting ready for work, my older son still asleep and my two younger children at school. I turned the TV on and saw images of the “tragic accident”. My heart ached for the passengers and those in the building hit. Then, right in front of my eyes just as it was millions of people across the country, another plane went flying into the other tower. I knew, just as we all did, before the journalist on the screen had a chance to even say it: I KNEW it was not an accident. We were being attacked. I called the schools of my two younger children and was advised I should let them stay so their day could be as “normal as possible”. (When they came home, they said the teachers kept their televisions on all day. They saw those images replay over and over and over.)

I woke my son up. He was leaving October 1 for basic training in South Carolina. I told him what had happened. As we watched the news, we heard about first the Pentagon and then the plane going down in the Pennsylvania field. I begged him to reconsider. I told him we would get him out of his contract. He just looked at me and said I hadn't raised him that way. He said it was more important than ever that he stay in, for me, his brother and sister, his country. “America is mine, Mom.”

In 2001, I “gave” the Army a wonderful young man. He was ethical, fair, protective and respectful. He was popular, fun to be around and talented. Just over four years later, a man who had seen horrors unlike any I have ever experienced came home. He didn't come home alone. He brought with him PTSD and, as we found out when I insisted on an MRI, a brain injury on the left side of his skull.

Sometimes, I think about the power to have one wish granted. If I could, I would go back in time and alert officials to the terrorists on those four planes. I would have a certain man accidentally choke on his dinner and not allow anyone to do the Heimlich maneuver and yes, I am referring to a so-called leader, Bin Laden. Then I look back over my journals and relive phone calls from my son: walking a little girl to school for the very first time in her life, losing comrades, even pictures of him with young children looking at him adoringly. I know there was a purpose for him over there.

Still, we live with the consequences of September 11, 2001, every day in our home just as millions across the country do, just as those who are citizens of Iraq and Afghanistan do. There are times when I wish he would have ran to Canada but I'm proud of the young man who stayed, stood and served. Today it is my mission that he and others who truly served do not be thrown away, that his son someday knows just who his daddy was before deployment and that I enjoy those moments in time with the young man I still see sometimes in the combat veteran who returned.