This morning I read the greatest news: a friend's son is returning soon from combat! He was going to surprise her but couldn't wait to tell her. Tears are filling my eyes even now as I remember the day my son surprised me on his two week R & R from Iraq. It was the day after New Year's and I heard a knock at the door. I looked out and saw a soldier's uniform. I was terrified. My son was in the middle of a war zone. What could it mean? Then I heard a voice tell me “Open the door and hug your son.”

I have never forgotten that day or that feeling. Even now when I watch Coming Home with my husband, I sometimes can't make it through all the episodes. I certainly never get through one without a lot of tears and memories. 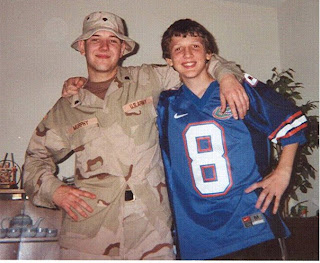 I constantly touched my son's face that first hour. He said he was told the family would be clingy and this mom certainly didn't disappoint. His brother was out playing basketball at the school down the street with friends. We decided to drive down there. Our soldier had to drive. I was still too shook up and in shock to even try. When we pulled up, my son walked over. He was a bit puzzled as he could see me in the passenger seat. When he realized it was his big brother, he broke out in a run and they hugged. The picture you see here is from that day. I slept through an entire night that night for the first time in nearly a year.

It was during that two week leave that I began the journey that got me here today, to Family of a Vet. The nightmares, the paranoia, both were noticed and documented. How does a soldier choose between the Tigris River on one side, innocent Iraqis on the other, with the enemy coming right at him and his younger brother and sister inside the Humvee with him? I was chastised for letting my daughter walk over to a vending machine just a few feet away because “You never know what can happen even that close, Mom.”

If your veteran is actually still in service, document any and everything you see that doesn't make sense. It soon will for he or she is probably showing the early symptoms of PTSD. If your family is going through a war here at home, you are not alone. We are here for you. Contact us. Oh, and even though there are many rocky days, always keep the memory of him or her coming home close to your heart. It really does help. :)