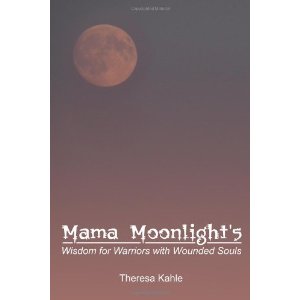 Theresa Kahle starts with a very small simple introduction.  She gives you her two rules and lets you know that is how she bases all of her teaching throughout the book on.  Now after I read the first two rules, I started to think “wow this isn’t what I thought it was!”  When I read the title of the book, it caught my attention because it gave the impression of a Native American Warrior base of healing and at this point I had nothing to lose.  I personally am not big on the Christian based books, but this one is different.  She has mixed Native American beliefs with those of common Christians.

Theresa Kahle holds a bachelor’s degree as well as nursing background and working in a psychiatric hospital yet the approach she uses of “Mama Moonlight” gives you the idea that she is trying to help not be a “head shrink”.  Because it is an elder like approach, you almost feel like you have to do what she says out of respect.  That “been-there-done-that” attitude would seem very appropriate for the general male wounded warrior.


The book takes a very “work book” approach at healing a soul of a wounded warrior.  The first half of the book gives you lots of examples and details into why each animal she gives you is right for you.  She works with the healing totem concept and personally I think it’s a great fit.  Her PTSD totem has two meanings, Post Traumatic Stress Disorder as well as Possum, Turtle, Snake, Dog.


While I read each description and how they relate to a wounded warrior’s soul I could easy see who in my husband’s life were the turtle, snake and dog.  She goes on to explain HOW to walk the healing path, and that you are already on this path, realizing it or not.  She suggests a note book approach to journaling and tracking your progress so that you are more aware of how your soul is healing and where you are in the path.  Something that may be discouraging is that she says that it takes roughly 5 years to heal, however she also states that you may be on the last years of the healing path by the time you picked up this book.  She gives a good list of books, television shows, movies and other media to find more “healing” in.  Each “chapter” starts with a very pleasant quote that really gets you thinking.  She uses both quotes and sections from the Bible as well as Native American ways throughout the entire book. The way the  book is put together you never feel forced into believing a set religion, just the general idea, that this is not in your control entirely but you do have the control and now the means to heal your soul and move on.


On a personal note, I would highly recommend this book for those who are READY to start a spiritual way of healing.  My husband is a very infantry based man, therefore this type of book may not do him a lot of good and there is also a good chance I’ll never get him to read it.  Even with his background in Native American/ Nature based beliefs.  However, I know that I need healing from past experiences as well as from suffering from secondary PTSD and I know that I can get great use out of this.  I really feel it’s a great book for any spouse who has dealt with the PTSD side of loving a war hero.  Perhaps it may even enlighten a person who is having a hard time understanding why our warriors act the way they do.  The entire section on the possum is a great simple way to compare how warriors deal with PTSD.  There are way too many sections I wanted to quote, this is one of those books that I will push around to anyone who will listen!


Theresa Kahle graduated from nursing school in 1979, when PTSD was being explored due to the responses of Vietnam Veterans to war. She received her bachelor s degree in education in 1982 and worked in psychiatric hospitals throughout the eighties and nineties. In 2007, when she began planning to leave the profession, she wrote this book to share her professional perspective with the young men who were coming back from Afghanistan and Iraq. Far from being a psychiatric theory, it is an attempt to do what she always did in the hospital, which was talk to each person and make sure he knows what he needs to know to cope.