Today in my life... let's talk about SUICIDE. 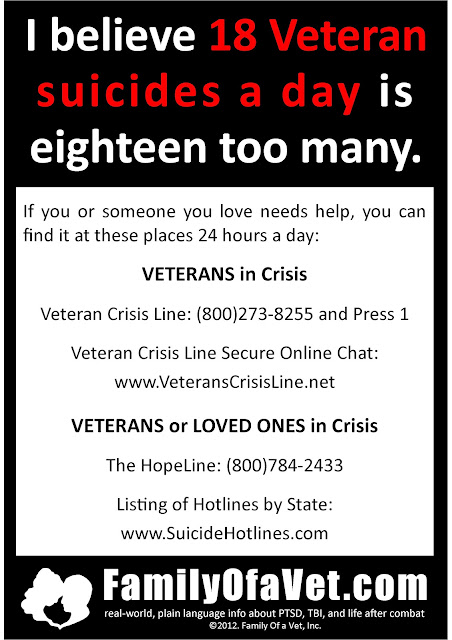 I am the founder of Family Of a Vet and in that role I talk to, by phone, e-mail, and message, hundreds of veterans and loved ones a month.  Truthfully, I've lost count.... and not because I don't care to count, but because these people are *SO* much more than numbers to me.  They're family... heroes... and mirrors of myself and my own dear hero.

There was a new study highlighted this week in the headlines, stating what most of us who work in this "world" already know.  The suicide rates among our heroes are continuing to climb.  The members of our military, our veterans, and their spouses and caregivers are at an EVER INCREASING RISK OF DYING.

In the last few days alone, I've talked with two people who attempted suicide, one who stopped at the last moment, and to the loved ones of three heroes who were lost to suicide.  TWO days... SIX people directly tied to these "statistics" we're talking about.  It's heartbreaking... and it's everywhere.  If I chose to, I could let the the sadness of this overwhelm me, but I won't.  I refuse to.  Instead, I choose to call out to you... to the world... and beg for, plead for, and demand help.

There are studies that indicate the suicide rate among veterans (currently said to be 18 per day... 1 every 80 minutes) is approximately 2 or 3 times that of the "average" population.  The military suicide rate is now officially also higher than that of the average person.  So basically, being a hero makes you more likely to die at your own hand.  There's something incredibly, terribly, monumentally wrong with that.

We *HAVE* to stop waiting for someone else to "fix" this... for the government, or the military, or the VA, or whomever, to come up with the solution.  While they're catching up to a problem no one was prepared for, people are dying... and they're dying fast.

So, what can we do?  Believe it or not, there are some straightforward (while not completely simple) answers that CAN help.

First - If you know a Veteran, get informed about PTSD (post-traumatic stress disorder) - a leading cause of suicide.  You can click HERE to get started.  If you don't know a Veteran, go to your local VA, Veterans Service Organization (like the VFW or American Legion) and tell them you want to help a local veteran.  I promise they can find you someone.  Make a connection.  Get involved.  Let these heroes (and their families) know you care. 1% of our population has served in the military... that leaves 99% to be the eyes and ears... the watchmen... the lifelines.  Surely that's an even trade?  They laid themselves down for your freedom... so now you spend a little time trying to make sure they don't die as a result?

Second - Don't be afraid to TALK about suicide.  Saying "Are you thinking about killing yourself?" is not going to cause someone to suddenly decide to commit suicide.  *BUT* not asking can be a matter of life and death.  If they answer yes, then call their local VA Mental Health Department (during business hours, if they aren't immediately at risk) or the National Crisis Hotline (available 24 hours a day, for those immediately at risk, or those who are worried they might be). The number for the Hotline is 800-273-8255.  Press 1 if you're a Veteran, anyone else can just dial directly.  By pressing 1, Veterans can get help, referrals, and a host of other services within the VA.

Thanks for listening,
Brannan Vines
Proud wife of an OIF Veteran
Founder of FamilyOfaVet.com - an organization dedicated to helping heroes and their loved ones survive and thrive after combat with real world info about PTSD, TBI, and Life After Combat!
Posted by Family Of a Vet at 11:33 PM