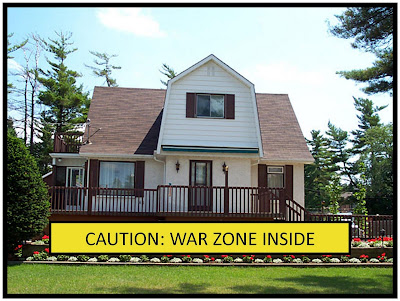 So, last night I shared that my husband had walked out... indicating that he was leaving me... in a classic TBI misunderstanding followed by a PTSD rage. Today, around mid-day, he was back. He just kind of walked in. Nothing was said. Truthfully, experience tells me at this point that the hours and days following an all-out PTSD episode like this are not the time to re-hash the details. that's something to be handled later after things have settled. But when I did try to talk just normally, I discovered a new issue.

I am so thankful (incredibly so) that he's home, the only problem is he seems to be seething mad. I don't just mean the "normal" PTSD pissed-off-at-the-world-so-leave-me-the-BLANK-alone kind of mad... I mean he's angry and fuming and wound so tight that it's almost like you can see the fury pouring off of him. Walking into a room is met with a long, litany of expletives. Any sentence either received a blank, angry stare or an equally uncomfortable, completely pissed off, WAY over the top response.

I'm sharing this for two reasons. One, a lot of people responded last night with kind words, prayers, and well wishes, so I felt like it was only right to post an update. But also because it dawned on me in talking through this with a friend this afternoon that a little under a month ago we added a new medication to his daily "collection" and took one away. I'm normally pretty on top of watching for changes (positive and negative) following med changes but this one totally escaped me. Of course now we're headed into a long weekend, but I'll be on the phone on Tuesday getting this worked out.

What a mess. From my perspective, I never slept last night. I'm freaking exhausted. I have a headache that makes me want to cry. My patience and my brain are shot. Yet still, I am the caregiver. I don't have any idea how I'll survive the next few days. Matter of fact, I'm not going to think that far. I'm just going to try to get through until our child is in bed tonight and hope and pray for some sleep. Then I'll deal with the next 24 hours.

I think this is the part that most veteran wives / military wives / caregivers get that there's also no way possible to explain to the outside world. The bare-knuckle determination and absolute denial of anything going on in your own head or heart that it sometimes takes just to get through the next day... or hour... or few minutes. When people would usually be running for cover, we're there sticking it out, trying to figure out why the bottom just fell out, and trying to figure out how to put it all back together again... how to keep saving our heroes... day in, day out. No one writes a manual for this. It's intuition and prayer and hope that you're making the right choices and then trying your best to move forward with the (always) limited information you have... and it's all something you do in the middle of the war zone that your home has become.

Oh, well. Back to it. Thanks for listening. Please keep us in your prayers... I have no doubt we're going to need it in the coming days.
Posted by Sydney Morgan at 6:28 PM