Our 12th Anniversary... What I know now about marriage with PTSD & TBI 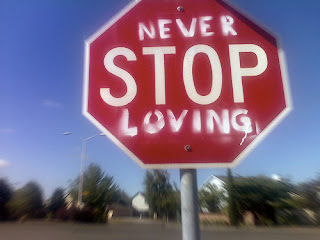 Today my hubby and I are celebrating our 12th wedding anniversary.  It's also for us sort of an odd milestone... our life together is now almost exactly split in half between our "normal" marriage before and our life together coping with PTSD, TBI, and other combat injuries.

We've learned a lot in the last five and a half years together and I can honestly say we're in a much stronger place than we were even two years ago.  Matter of fact, we spent our ten year anniversary arguing and then barely speaking... I spent most of it crying.  Now, our life together hasn't become magically easy and unfortunately "Beastie Boy PTSD" and his cousin TBI still are very regular fixtures in our home.  But, there are some lessons we've learned along the way that have enabled us to get to a stronger place and I thought today would be a good day to share.  Who knows, maybe you'll find something here that will help you!

So here, in no particular order, are the things I know that help -

I no longer expect my hubby to be my primary source of emotional support.  I have no doubt that he loves me, but there are many days where my "stuff" is just too much for him to handle on top of his own "stuff".  There was a time I really missed being able to curl up in his arms and offload my worries and fears and concerns... but the times where that works, when a "good" PTSD time coincides with a meltdown on my part are now few and far between.  I hold dear the times it does work out, but I've developed trusted friendships... many of whom are fellow Veterans wives... that give me a place to find emotional solace without being hurt or angry or upset that my husband just can't deal with it.  That whole NOT being angry, hurt, or upset thing is a CHOICE though... a choice I've had to make and then get to the point where I'm okay with it.  It's a process, but it's doable!

If I had told my just-married, nineteen year old self that one day I would be talking about how important it is to have space in a marriage, I never would have believed me :)  But, in marriages that face as much heartache and struggle as ours, having some separate interests and places to (literally or figuratively) go makes a big difference.  It's harder to stand on our own... to be our own people with lives and friends and passions... when in the middle of dealing with life after combat.  Truthfully, both from the Veteran side of things and from that of the spouse, it's too easy to just get lost in a miserable sort of no man's land where life is nothing but pain and sadness and loss.  Letting ourselves stay there only serves to kill our marriages and ourselves a piece at a time.  I know the idea of doing anything but surviving can seem impossible, BUT if you do want to survive you have to break out of that cycle and get yourself out and focused on something other than PTSD, TBI, and other injuries.  These "invisible" injuries can only take over our lives if we let them.

My husband and I communicate more honestly (sometimes brutally so) now than we ever have before.  Now, we weren't going around lying to each other before... but we were letting those little aggravations and festering feelings stay hidden and unsaid.  The "mum's the word" philosophy works in many "normal" marriages... marriages where slights and hurt feelings are seldom.  But in a marriage impacted by PTSD & TBI where those things sometimes come in seemingly endless tidal waves, unexpressed feelings have a way of snowballing into a huge, monumental mess that suddenly explodes.  Now, if I do something that pisses my husband off, he'll say so... and if he's hurt my feelings or made me angry I'm not shy about saying so.  We try to be "honest" as constructively as we can (staying away from name calling, etc., whenever humanly possible) and I also keep in mind that just because he says something from a PTSD-fueled place doesn't make it true.  But, this tactic works for us and we have a lot fewer HUGE arguments to recover from.

Now, this has been a struggle for me.  Prior to PTSD/TBI world I was not a grudge holder... but for several years, after too many days and nights of raw emotion and walking on egg shells... I became a first-class grudge holder.  An argument with the hubby could literally leave me fuming and "fussy" for DAYS and in some cases more.  But at this point I've learned life is too short.  The only thing I'm doing by holding those grudges is damaging a marriage that I value to a man I love.  He may have his faults... and I have mine... but if my intention is to keep my marriage going (which it is) then I have to let go of the need to say "I'm right, I'm right, I'm right" and move on.  Is it hard sometimes?  ABSOLUTELY.  Is it worth it?  WITHOUT A DOUBT.

Not Comparing or Letting Others Compare

Now, my marriage as it stands is not "normal" by the standards of many... even some within my own family.  I attend a lot of family functions on my own or with my daughter.  I spend a good deal of time on my own.  There are a lot of places and things we just don't do together that we did before combat.  My hubby and I use a lot of humor to make fun of ourselves that others (at least those who don't live this life) don't quite get.  We have a different dynamic... a different way of dancing through our life together.  But for us, it works.  And that's what matters at the end of the day.  It doesn't matter what someone else's marriage looks like... what someone else thinks my marriage should look like.  What matters is that we're together, fighting to stay that way, and on most days winning.

Knowing That This Moment Doesn't Have to Define the Next

Something else that can happen in the raw places that life with PTSD & TBI create is that single moments can begin to seem much larger than they are.  Don't get me wrong, I'm NOT saying they're not painful and hurtful and that they can't sometimes seem to suck the very life out of you!  But, what I am saying, is that recognizing them for what they are (PTSD/TBI fueled moments that will pass) can literally save a marriage.  It's too easy to get lost in those moments and begin to look months or years down the line... that moment growing into a lifetime of moments just as hurtful and painful... and the whole picture becomes unbearable.  I'm here to say that what is happening now doesn't define what will happen in the future.  As you and your hero learn to manage life after combat together things shift.  Life won't (in my experience) ever be what it was... but you learn to manage together, grow, change, and find a new path.  You can be happy... just a new sort of happy.  But to get there, you have to keep going.

To put it simply, there are days when the only way I get to the next is by putting my head down and pushing through.  It's not always easy... sometimes this life down right kicks my "grass"... but I keep going because I've made up my mind to do so.  I'm not going to let PTSD, TBI, physical injuries, or anything else destroy my family.  Does my resolve ever waiver?  Well... it does shake a bit sometimes... but far less than it used to.  And being stubborn, and "keeping on keeping on" have gotten our family past the super rocky crisis point to a much better, more level playing field.  It takes work.  But, my hero and child and the life we're building together are worth it.

So, there you go... my "cheat sheet" of things I've learned so far about marriage with PTSD & TBI.  I hope it helps someone out there skip (or at least fast forward through) some of the places I had to linger for a while.

Lots of ((HUGS)) as always,
Brannan Vines
Proud wife of an OIF Veteran
Founder of FamilyOfaVet.com - an organization dedicated to helping heroes and their loved ones survive and thrive after combat with real world info about PTSD, TBI, and more!

P.S.  And happy, happy anniversary to my hero husband... a man who can still make my heart leap.
Posted by Family Of a Vet at 5:35 PM