The Love Letter Campaign: Now I Have Your Back 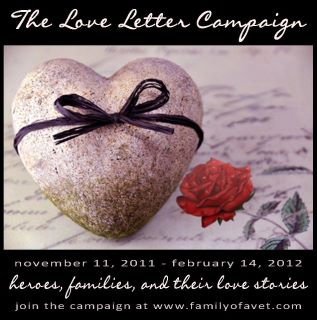 Where do I start? I guess at the beginning...remember when we met? At a party that wasn't supposed to exist on a night when we were both supposed to be somewhere else. I remember seeing you and you took my breath away. I'm not sure exactly what it was but I knew that you were different from anything I had ever known. I didn't have the courage to talk to you and when I finally did work up enough courage to try, you were gone. When you walked back in, it was like I had air in my lungs again and I did finally talk to you. From that night on we were inseparable...people are stunned when they hear that we moved in together on the night that we met but it didn't seem odd to us, it seemed natural...

I remember the first time you went out into the field after we met, you took my cell phone with you so you could call me and I remember how my heart fluttered when I heard your voice on the other end of the line saying "hi baby". Do you remember how you would volunteer to be the one to drive from the field to the mini mart on the pretext of getting cigarettes but really you just wanted to see me for a minute? You would call me and I would hop in the car and meet you there only to kiss you and talk for a minute.

I think about our tiny first apartment, about the time the sink over flowed and flooded the kitchen, how we didn't have a car and had to walk to the grocery store and you would have to get up extra early to take a cab to work. The endless hours while you were at work and I was bored to death because we didn't have enough money for cable or the internet and washing clothes in the bathtub. Its funny how now I look back on those times so fondly.

Our relationship was crazy fast and no one understood it but us, you asked me to marry you a week after we met and then 5 weeks later you were deployed to Iraq. We were so excited to get married that we couldn't wait until R&R to come around, so we did it over the phone! Life was so exciting, we were so proud to be a military family, we would talk about all the places we would go.You had such aspirations for a career in the military. By then we had a daughter and you were one proud daddy, remember on the phone when you deployed, I told you that we were going to have a girl and you starting yelling "I'm gonna have a baby girl!" at the top of your lungs? lol.

Then you deployed again. From the second you left I had the feeling that somehow things would never be the same again, I didn't know quite how but I could feel it.

I remember the phone call in November, just before Thanksgiving, you told me that your vehicle had hit an IED but you were okay, just banged up. Little did we know the impact that IED would have on our lives. In the months to follow I got 5 more phone calls like that...after the second one it was just sort of routine of "honey, we hit an IED". "Do you have all your parts?" Then you would answer with a simple, "yeah" and we would go on with our conversation. I remember the terror that ran through my body at 1 AM when the phone rang and the caller ID said US Government....

You are home now and out of the military, I miss the military life, isn't that funny? Despite everything that happened I still miss it but I think part of that is missing the life that we used to have together. PTSD and TBI took you away from me, it has changed everything. Sometimes the old you is still there, in bits and pieces and then you slip away again and I feel selfish for wanting to hold on to you for a just a little bit longer. The dreams that we used to share can no longer be and it hurts although I've learned that I have to mourn those, let them go and create new dreams.

Many times you say that you are lucky that I have stayed with you and I can't help but think how lucky I am to have you, to have known you. Sometimes when I look at you I can still see that 21 year old boy who took my breath away and sent my heart aflutter. I miss him so much. I miss YOU so much. But I have gotten to know the man who has come home from war and I've learned to love him. Yes things are difficult, beyond difficult, there are times when I honestly don't know how I will make it one more day. But then there are times like just now, you came upstairs to find me sobbing while I write this and within a minute you had me laughing hysterically. The bad times out number the good for the most part but the good times outweigh the bad. No one knows me like you do, no one loves me like you do, no one makes me prouder than you do. I am proud of all you have done and I am proud that despite the PTSD and TBI you keep trying. I couldn't imagine a life without you by my side, we became Jenny and Kevin on the day we met, we go together, we are a set, there is no Jenny with Kevin and no Kevin without Jenny. So I stay and I'm happy to stay, you had my back, now I have yours. 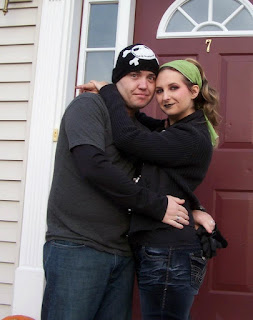 Posted by A Southern Girl's Stand at 4:49 PM