United Front: Coming Together as a Community for a Fallen Brother in Arms 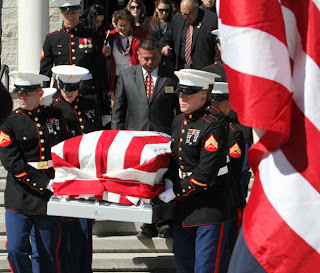 Note: WBC never showed up at the church or the cemetery that day. Instead, we heard reports that they were intimidated enough by the level of support showed for SSG Diaz and his family that they instead traveled from the nearby park to the Cassidy gate of Fort Bliss to protest instead. Nevertheless, the mission of the Patriot Riders and those who helped protect the Diaz family was a success, as the family never saw the WBC protestors and SSG Diaz was laid to rest in peace.


Submitted by: LeAnn Bradshaw-Mueller, wife of an Army Combat Medic and OIF Veteran and FOV Volunteer
Posted by A Southern Girl's Stand at 10:46 PM