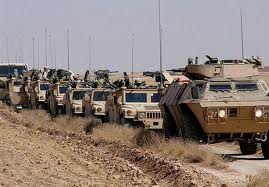 I had been working for the local Veteran’s hospital for a year when I realized that although my husband was the one who was in combat in Iraq, it was turning out to be that I was the one with bigger problems. What started as an ordinary day of administrative mandatory education at work, ended up being the beginning of my awakening to just how deeply combat veterans and their families are affected

One of the presenters was part of our hospital’s OIF/OEF outreach team.  I had met him just in passing, and could recognize him and call him by name, but I didn’t have any other experience with him, professional or personal.  He was giving a presentation on what life was like in Iraq.  I remember thinking to myself that I was excited.  I was even proud!  My husband served there! Even though most everyone who surrounded me did not know I was married to a combat vet, I still felt very proud.  I may have even smiled to myself. This presenter used the full array of multimedia available to him, including a video. The video was of what it is like to drive in Iraq.  Again, my pride for my husband and his brothers in arms swelled.  After all, he was a .50 cal gunner on a humvee, so it was like watching a day in the life of my husband at work right?!

My pride quickly gave to a different, foreign feeling about 2 seconds into the video. As I sat and watched the humvee bump and nudge cars out of it’s way, the sound of the humvee was deafening. It was so loud, and it wouldn’t stop. There were Iraqi’s everywhere, just civilians, but they just stood in the way, almost taunting the soldiers to run them over. Iraqi men and even some young boys just gawked on the side of the road or even while crossing, taking there sweet time. Even I, a civilian, going on instinct alone, new that something wasn’t good about that, that there was a sense of urgency in the way the truck was driven, the occasional swear word thrown out by the driver or one of passengers. Then the truck had to go through a “round a bout”. I knew those things gave my husband panic attacks, here I was, about to witness a humvee going through one. It was too much, it was too loud. I was waiting, holding my breath. “Prepare yourself, don’t be scared, you KNOW something is going to explode, get ready,”…. I closed my eyes and readied myself for the anticipated sound of an explosion, I gripped my thighs so that I wouldn’t jump. Tears just fell down my face. I have never cried like that. The tears just came and came, big heavy tears. I sat and cried in silence praying that no one saw me. Also praying that the presenter saw me and would magically know to shut off the video. But the sound of the Humvee slowing down and then going faster was all there was. There was no explosion, so I opened my eyes.

“Why the hell are you crying!!?? What is the matter with you?! This was what it was like over there  so buck up!”  I sat there and screamed at myself. I screamed at myself to pull my self together.  It wasn’t working.  I got up, walked out, and found the nearest office and sobbed.  Through my tears I was able to get the girl who’s office I had invaded, to let me use her phone.  I called my husband.  I just needed to hear his voice, make sure he was okay.  And he was.  And Thank God, he answered.

I took a few minutes to pull myself together, wiped my eyes, and returned to the conference room. I walked in feeling like the biggest loser ever. I wasn’t sure if the presenter knew I was a combat vet’s wife, I think he may have, but I don’t know for sure. No one said a word to me. The presenter either didn’t notice that I had just freaked out, or maybe he thought I was going to the bathroom. I was sort of glad no one said anything. I had embarrassed myself. I had shown anyone who noticed my little episode that I was weak, and for what? For my husband’s experience? I wasn't even married to him when he was over there.

Fast forward a year or two to today.  I often think back to that moment. I do.  It was a teachable moment.  It was a defining moment.  It was a pivotal and life changing moment for me.  I realized that I had started to mimic my husbands behaviors that I always thought were beat into him from just simply being in the army for 4 years.  I hadn’t realized, at that time anyway, that they were behaviors and feelings resulting from a much deeper, darker, tender place.  He had spent an entire year in a combat zone during one of Iraq’s most dangerous times.  It was that day that I started researching and reading on what that whole experience was like for him.  It wasn’t good research.  It was amazing research.  From videos that he and his combat brothers made in Iraq, of pictures and editorials written and captured by the journalist with them, to the more cheerful down time in the barracks in Germany, to scholarly articles on combat, to conspiratorial essays, I devoured it all.  I realized that my husbands constant vigilance, door locking, relocking, checking, scanning, temper, lack of sleep, drinking etc were all coming from a place that for that time being, was of necessity.

But this essay isn’t about my husband’s experiences.  This essay is about reflecting back on my experiences so I may use them for the greater good of our veterans. What would have happened if the presenter DID notice I left abruptly and returned tear stained and defeated?  What if he would have reached out?  What would have happened if I would have pulled him aside after the meeting and told him just what happened? Surely he would not have laughed or thought me crazy, he was a Social Worker! He would have wanted to help me, right? But I didn’t know what was happening. I didn’t know these feelings, I didn’t recognize this place.  The quick reaction, the lump in my throat, I haven’t cried that way before.  I, at that time, did not understand that what had just happened to me was normal, common, and most importantly, nothing to be ashamed of.  I did not have the words at that time to describe to anyone what I was feeling.  The point is, I am not the only wife who experiences secondary trauma.  There are other names for it. Caregiver fatigue etc etc.  Resulting from being to compassionate I’ve been told.  I laugh at that, because there is no “too compassionate” when it comes to the man I love.  There is no “too compassionate” when it comes to caring for, understanding, and reaching out to men and women who defend the very things many American’s take for granted.    What now? What do I do with this experience?

That is a question that I reflect on everyday.  I pray and wait patiently for some sign, so signal from the universe, from God directing me where to go from here.  There is one thing that I learned from that day that I feel other women married to combat veterans need to know; I believe greatly in the power of acknowledging and validating.  It is these things, these simple things, that empower us to set down our chains, our fears, and move forward with life.    Was that all I needed that day?  I think it was.

Submitted to FamilyOfaVet.com by an amazing woman and spouse of a combat vet, Kateri. Thank you so much for sharing your experience with us!
Posted by Britt at 3:30 PM

Email ThisBlogThis!Share to TwitterShare to FacebookShare to Pinterest
Labels: Caregivers, Spouse of a Vet