My husband, Sean and I had only been dating at the time. I was still in high school, my sophomore year in fact. I was sitting in my homeroom class, which was graphic design, when the teacher next door burst in the door and yelled across the classroom, "Quick turn on the T.V. someone just flew a plane into the World Trade Center!". The room went quiet while our teacher turned on the T.V. for us to see. I remember watching the smoke coming out of the building after the first plane and then watching as the second plane hit. At first, I was scared because my brother is a flight attendant out of NYC and I wasn't sure if it was one of his planes that had been hijacked. Of course, at the time I had no way of contacting my family to find out if my brother was alright, and was stuck the whole day wondering till I got out of school.

I went the rest of the day in a kind of daze. People all around me were buzzing about what happened. I remember also hearing in passing about the plane that hit the Pentagon, which only heightened my fear for my Uncle, who was a Marine and worked at the Pentagon at the time. I remember being a bit angry too that I had no means of communication with my family because my parents wouldn't let me have a cell phone then.

When I went to lunch, I saw Sean standing where I normally sit with my friends.. He was in uniform and twirling his keys around. He told me he came to take me out of school. At first I was unsure about leaving, as I had never skipped class and I didn't want to get into trouble, but then I realized who knew what impact this was going to have. Besides, I only had P.E. left to go anyways. He took me to his house where both his parents were home sitting in front of the television watching the news coverage. So, we all just sat there watching everything for a few hours before Sean took me home.

Sean had been debating back and forth about joining the military. He said he's always wanted to ever since he was a child because his father was a Marine. I wasn't too happy about it in the beginning because I was thinking selfishly about him being so far away from us and not being able to be together. That night on September 11, 2001, he told me that after what had happened, his decision was made. He was joining as soon as he could. I didn't protest anymore because I knew from then on things would be different for us.

Whereas my brother and uncle did turn out to be find that day, Sean has paid the hefty price since.

I have often felt everything happens for a reason. Perhaps, I was always meant to be with Sean to help be a patient, loving, and caring wife he needed in order to work through the trials he faced. Perhaps Sean's PTSD, TBI, and physical disabilities weren't so much as a way to punish Sean, but perhaps to help teach others. I know that since we had children, we have done our best to teach them about the realities one can face in life. I know we have shown our son some of the footage from the tragic day and done our best to explain how one never knows when something like that can strike and so it's imperative to prepare as best as you can for anything. We can't prevent things from happening, but we can at least learn from the events of 9/11 and the trials we have faced since and do our level best to teach our children as well as others and perhaps be able to lessen the tragic affect such things can have. 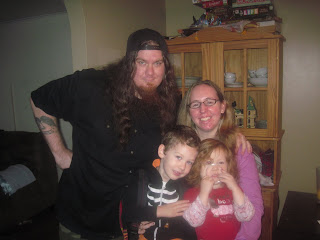 The Taylor Family, September 2011
Submitted by Aimee Taylor, a proud wife of a combat veteran.
Posted by A Southern Girl's Stand at 3:32 PM