March, 2001.  M left for his hardship tour in South Korea.  The only thing that was keeping me sane was the knowledge that he had a mid-tour leave in 6 months.  That would be September, right about the time Gabe turned 1 year old.  I was okay with that and I could manage.

He PCS'd to Camp Hovey, Korea and Gabe and I were able to stay in housing on Fort Riley until his tour was over.  We talked on the phone a lot and we were okay.  We had some friends at Riley and a group of 'Waiting Spouses'.  Still, I traveled to Topeka a lot...it was only an hour away and all our family was there.
I soon discovered that living in housing at Riley while your soldier is PCS'd halfway around the world is a nightmare.  Back then, every record was still filed in paper and all of it was in Korea with him.  Getting anything done was virtually impossible.  I eventually decided to get a job and apartment in Topeka and I cleared housing at Riley in the summer.

Life resumed to somewhat normal as autumn approached.  I was excited to have Gabe's first birthday around the corner and, of course, have M home for a bit of R & R.

The morning of September 11 was pretty much just like any other day.  I didn't have to be into work until a little later in the morning, so I was on the turnpike heading out to Gabe's daycare to drop him off a few hours later than normal.  I was listening to a radio station out of Kansas City, 98.9 The Rock, and something weird happened.  The typically snarky morning host suddenly became very sullen...he said something was going on in New York with the twin towers.  I listened, concerned, as I finished driving.  I watched the TV with Gabe's daycare lady as the 2nd tower was hit.  It was surreal.  I hurried to my mom's office to check on her and arrived just in time to watch, horrified, as the South Tower collapsed in on itself.  The smoke, fire and falling humanity was overwhelming.

In a daze, I made it to work and spent a lot of time watching television and waiting on a call from M.  This was before I had a cell phone, so I just had to sit by my office phone and wait.

Fianlly he called.  He told me, in no uncertain terms, to stay away from Fort Riley, Fort Leavenworth and Forbes Field here in Topeka.  He said that he was on alert and headed to the DMZ.  He told me they didn't know what was happening, but that they were sitting ducks if anything happened in Southeast Asia.  I was just numb.

Later, he would tell me that he was asleep when the attacks happened...he was awoken and thought it was someone playing a video game.

Meanwhile, life went on.  I don't remember much, but I know M called a few times on the Sat phone from the Bradley on the DMZ to give me updates.  He was okay, but they were staring at the North Koreans across the fence, waiting. 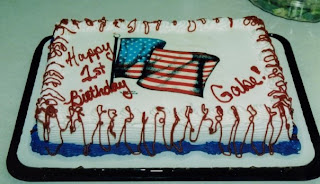 Gabe's birthday came and I decided to forego the SpongeBob birthday cake for an American Flag instead.  My brother was home from his Navy A-School and found a few extra days with his family because his flight to Guam (his first duty station) was cancelled with every other flight in the country.

Needless to say, M didn't make it home for his mid-tour leave.  He instead spent it in a turret, defending our country from a merciless foe.  He finally did make it home in March, 2002 and a year later he deployed to Iraq.  He fought through the Battle for Baghdad with the First Infantry Division during one of the most raw and feral times in this conflict.  His experience, as is the case with many of our veterans, has changed him and our family forever.  However distressful these changes are and continue to be, he is still a hero and always will be.