I was 19 years old and working at Sears, selling sports equipment. We were just opening and I was headed to the cash room on the second floor. This took me through the TV department, where I saw a HUGE gathering of people. I stopped and saw first twin tower on fire, and not a minute after I stopped to see what was going on the second plane hit. I felt drained instantly. I just witnessed people dying for the first time in my life. I left work right away and went to my wife's high school. She was at lunch at this point, and I knew where she would be. I met her and told her what was happening, and we both left (she skipped her last class). We drove to my parents house and watched the events unfold for the rest of the day and into the evening.

I've always wanted to serve in the military, specificly the infantry, since I can remember. I have fuzzy memories of my dad in his fatigues when he was in the Marine Corps. September the 11th, 2001 pretty much cemented my decision to join the Army. I remember the night of 9-11, there was a report of a fire fight in Afghanistan, and I thought "that's where I'll be going..". Little did I know we'd be sent to Iraq instead. I didn't protest though. I'd made it. I was the Infantry.

I've never forgotten that day. It's burned into my memory forever. I've even shown my son some old (ha, old. Jeeze.) news clips about it, and told him that the world is a dangerous place and that there are bad guys everywhere. "But," I tell him, "for every bad guy out there, there is a good guy who will fight him and protect the people he cares about". He's starting to understand. He's begining to ask about my medals, and asks "did the bad guy pow you in the head?"...to which I reply "Yeah, but he didn't do it right".

I joined the Army to fight the "bad guys" because of 9-11, and I suffered two injuries during my deployment. Two injuries that still take their toll today. I'd do it all over again, given the chance. 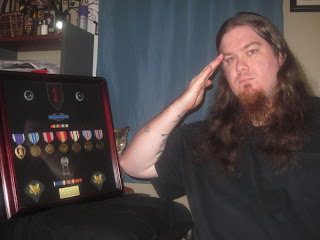 Submitted by Sean Taylor, an American Hero that selflessly enlisted right after 9/11.
Posted by A Southern Girl's Stand at 8:07 AM