The Day That Changed our Lives

I remember 9/11 very vividly....
My husband, Bobby, was not in the military at the time, but had been in the Marines prior to this day. He had been trying to re-enlist in the Marines and had not been able to as of this point. So we had decided to be over the road truck drivers.  We had come off the road in May of 2001 and he went to work for a local company driving for them so we could try to focus on his being able to re-enlist.

On 9/11 Bobby called me that morning to tell me that I needed to get up and turn on the TV. I asked him why, since he sounded very tense and nervous. He proceeded to tell me that they were hearing rumors that the WTC had been hit by a plane. I jumped up and ran into the living room and turned on our TV to find that every channel had live coverage of the tower being hit. As I was watching I saw the second plane fly into the second tower. I remember being in a complete state of shock and I did not know how to act or what to think. I remember being on the phone with Bobby telling him what was happening and then just screaming that the second plane had hit and I just sank to my knees and started crying. I watched that plane fly right into the tower. On and off all day I was on the phone giving updates to Bobby and just staying glued to my TV.

At some point about a week later, I received a knock at my door and when I answered it there was a man in a Marine uniform standing at my door. My heart leapt into my throat as I realized what this might mean. The Marine asked me if this was the residence of Cpl Robert Riccardino.  I told him that it was and he then asked me if he was home. I told him that he was not at home and that I was his wife and could I take a message for him. The Marine then handed me an envelope and asked that I give it to my husband. I immediately called Bobby and told him about the Marine and he said he was on his way home and we would look at it together. That envelope was a letter that was officially putting Bobby on alert to be recalled due to the nature of the attacks we had been under on 9/11. I cried for weeks not knowing when or if that call may come in. It never came, but Bobby remained prepared all the same.

In May of 2003, Bobby was back out on the road and still wanting to get back in the military. I ran across an ad in the local paper from a recruiter for the Army National Guard. I called the recruiter and talked to him about my husband. He was intrigued and wanted to meet him. Bobby was due home in a couple of days and we set up an appointment for them to meet. Bobby was still on Inactive Ready Reserves with the Marines until July 31st of 2003 so nothing could move forward until then. However, they did do up his paperwork and get his MEPS taken care of and they signed an agreement that he would begin his service with the National Guard on August 1st, 2003.

Things seemed to move very quickly at this point and by May of 2004 he came home from his weekend duty to inform us that he had been activated to deploy. My whole world fell apart at that moment. The unit he was to go deploy with was not even his unit and he had been hand-picked by the governor of Alabama to go with this unit because it was a transportation unit and he was a truck driver. I could not even breathe, I was so distraught. In June we had to go to Camden, AL for the mobilization of the unit to Ft. Bragg, NC. They would spend one month training there before shipping out. This also meant that he was 10 hours from home and that made traveling to Bragg very difficult. We did make it up for the family week, the week before deployment and we were going to find a way, I was determined, to be back on that Friday to be there for the Saturday morning flight for Iraq.

Bobby was supposed to deploy on July 30th, but he never got to deploy. On July 25th  he was diagnosed with stage 2A testicular cancer. I had just returned home from my sister-in-laws house in Ft. Gordon, the halfway point from Ft. Mitchell, AL to Ft. Bragg, NC, and had just barely started to unpack to wash clothes we had taken with us when I got a phone call from Bobby telling me he had cancer and was going into immediate emergency surgery. That is the last thing I really remember. Others have told me things I said and did, but I do not remember anything other than that my husband, 28 years old, had cancer and was going to surgery and I could not be there with him. I did not know how I would make it through this life without him; I was not ready to let him go. More so than that, I was so hurt that he was going through this without me there and how scared he must be. My sister-in-law told me later that I called her and she had to literally tell me item by item what clothing to pack to come back to her house. My best friend, Robin, begged me not to leave without her. I have no recollection of any of this. I do remember trying to get help from AER and being told that this was not a life and death situation and since my husband was out of surgery at that point and in recovery they saw no need to help me get there, which is when my father-in-law told me to come to his house and he would give me the money. My father-in-law paid to put brand new tires on our car and gave me the money to get back to Ft. Bragg. I will never forget how upset I was over that. The only silver lining in any of this was the fact that my children had stayed with my sister-in-law for the week until I returned to so we could go be with Bobby when he left. Had they not been with her I don’t know what I would have done.

In June 2005, Bobby went full active duty. The Army had kept him active while going through Chemo and another surgery that only granted him a 10% chance of living. We are grateful for that generosity given to him as they did not have to keep him active. August of 2005 we moved to Ft. Hood, TX. In October of 2006 Bobby deployed to Iraq and was in the wave of troops that got extended. He was there from October 2006 through January 2008. That was a very difficult 15 months, but we made it. As many know, he did not come back the same way I sent him over there. He was so withdrawn and very jumpy. This, along with all the other craziness that happens over there completely changed my husband into a stranger in our home. Then in February of 2009 he deployed again until January 2010. He again came home even more distant and different than before. By the time he came home from the 2nd deployment we had orders to Ft. Bliss, TX. The distance that had grown between us pushed us to the brink of divorce. We still are not where we were before that very first deployment and we will never be there again. But we are finding ways to make our life just as good or better and find our way back to each other and to remain strong in our marriage.

So, I guess you could say that that tragic day in our history, September 11, 2001, changed our lives dramatically in more than one way. Some ways are positive and some are negative, but in the end I still love my husband and I am so proud of who he is and what he has done to keep freedom in this country and to keep the horror of war away from our front door. 9/11 was a day that my husband began to push hard to go back into the military. He wanted his beloved Marines, but was unable to get in because of the custody arrangement with my ex husband and they were afraid it would cause significant issues within our marriage and affect how he would serve as a Marine. If 9/11 had not happened we had made the choice to just let it be and not try anymore for active military duty. Our soldiers did not ask to be sent over there, they went over there to protect those that don’t care and those that do. They went over there to keep the rest of us from having to see or live the things they did over there. My husband has lost friends over there, and he did not deploy this rotation due to his stress issues and it is not something he handles very well. He would rather be over there with his fellow soldiers, fighting beside them and helping to protect them.

Freedom isn't free, many men and women have died to protect that right for us and many more will to continue protecting that right. “IF YOU CAN’T STAND BEHIND OUR TROOPS, THEN STAND IN FRONT OF THEM!” I support my husband and all of his fellow troops in all branches, everyone should. I love you, Bobby and I will always support you and stand behind you. Thank you to all of the troops that fight for us and God be with those families whose loved ones did not make it back home. 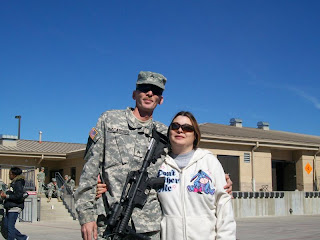 SSG Riccardino and his wife, April
Submitted by April Riccardino, a proud wife of an Active Duty Combat Veteran.
Posted by A Southern Girl's Stand at 2:18 PM