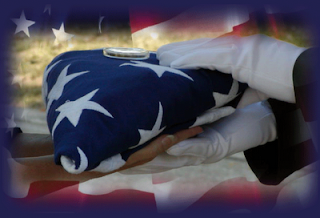 As we enter into this 4th of July weekend... a time when many members of the military, veterans, and their families take time to think about the heroes lost in combat who are forever etched on our hearts and minds... I'm deeply concerned about something brewing in Houston, TX.

Now, let me first say that I am a Christian, but I think this issue should be a great big giant red flag for anyone who respects and understands the comfort brought by faith in times of despair.  Whether your Christian, Jewish, Muslim, Buddhist, etc., etc. - whatever your religion - that belief plays a huge role in your ability to cope with life's darkest moments.

You can read more details about the story in the links at the bottom of this post, but it basically boils down to the fact that Arleen Ocasio, the Director of the Houston National Cemetery, has taken in upon herself to strike anything religious from the operation of the cemetery.  No one is allowed, without prior approval, to say "God," or "Jesus," or even offer optional religious recitations.

An article published in The Houston Chronicle (CLICK HERE TO READ IT) says:


According to court documents, Ocasio banned veterans organizations and volunteer groups from using certain religious words such as "God" or "Jesus," censored the content of prayer and forbade the use of religious messages in burial rituals unless the deceased's family submitted the text for prior approval.

The documents allege that VA prohibited volunteer honor guards from providing optional recitations to families for consideration, and that when burial teams conduct military honors for a veteran's funeral, a government official monitors what is said.

Other volunteers have even stated that all of the religious items have been removed from the Cemetery's chapel and that the "Chapel" is no longer called a chapel... but instead has been renamed a "meeting facility".

Now, I know that there will be a lot of debate about this issue... about constitutional issues... about whether a Federal facility should even be seen as taking part in religious activities, etc., etc., etc.  And, while I stand on the side of the First Amendment guaranteeing us the free exercise of religion which to me these actions clearly impede... that's not really my point.  And, I strongly believe, while it may have to be the legal focus in this matter, should not become the primary heart focus of those concerned.

Those families should absolutely, without any doubt, be afforded the right to mourn hand-in-hand with their Creator.  They should not have to fight for the "privilege" to lay their hero to rest with the words and actions that bring them the most comfort.  The only issue should be the support, care, consideration, kindness, and respect we owe those who grieve... and more importantly the debt we owe to the fallen heroes NOT to place further hardship on those they've left behind.

To read more about the story, both of these articles offer a good overview:

At the link below, you can read Congressman Poe's letter to Eric Shinseki, Secretary of Veteran Affairs:

Here is a link to a Facebook "Cause" about this issue (not something we started, but it was the first place I heard about this story and what caused me to start researching the issue):

Finally, if you are concerned about this issue, I encourage you to write to Secretary Shinseki at the address below (After all, complaining about an issue doesn't do any good... it's our responsibility to make sure our voices on these issues are calmly and reasonably heard!):


Thanks for listening,
Brannan

Brannan Vines
Proud wife of an OIF Veteran
Founder of FamilyOfaVet.com - an organization dedicated to helping heroes and their loved ones survive and thrive after combat with real world info about PTSD, TBI, and more!
Posted by Family Of a Vet at 9:35 PM