"For love of country they accepted death..."  ~James A. Garfield 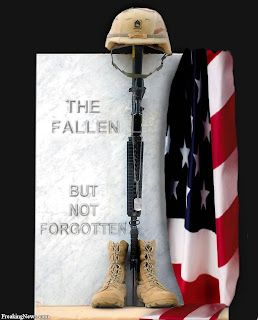 Memorial Day... What does it mean to you? What are the thoughts that go through your mind as you think of this day? For many, it is a day off work and a day of cooking out with a few drinks. In our world, the military world, it is complete opposite. It is a time that we remember the ones that have been lost in combat. Not that there is a day that goes by that we don't think of them or keep their memories alive, but on this specific day, we hope that everyone will take the time to remember and honor those that have been lost while serving our country. In no way am I saying that people should sit at home and do nothing during their day off, I am just simply stating that I wish people would not take the day for granted and remember the meaning behind this day. While you are starting your day or in the middle of your day, take just a moment and remember those that we have lost and remember those left behind picking up the pieces. Widows/widowers, children, mothers, fathers, sisters, brother, cousins, aunts, uncles, grandparents, friends, and so on that have been left behind are remembering their loved ones with every day that passes, take time on this Memorial Day to remember all of them as well.

When deployment time comes, no matter how many you have been through, you try to prepare yourself for the possibilities that could and more than likely will occur. However, no matter how much preparation you do, you can never prepare yourself for deaths. No matter how many times as a spouse I have received the dreaded phone calls or have had to make the calls to other spouses, it never gets easier and we never forget. The service members we have lost hold a special place in all of our hearts as do their families. We take things from these men and women in the words and lessons they have left behind and we try to keep their memory alive.

The first loss I was faced with from OIF was in 2004 when a friend of mine from high school lost his life due to a RPG. My mom called me as I was getting ready for work to inform me of his death in Iraq. My husband was in AIT at the time. I felt myself become sick and just broke into tears. At the time I knew he was married with a daughter, but had no idea until recently that he had actually married a friend of mine from high school. Whenever I make the trip to GA, getting off the interstate we cross over a bridge to head to my moms house. There is a sign that dedicates the bridge to Antoine Holt. Every single time we drive over it, I still tear up if not cry.

In between the years of Kevin being in the army, we have been faced with many other losses. In 2006/2007's deployment to Mosul, his unit lost 31 guys. There is no way to express the sadness that swept over everyone or the memories that we all hold close to us. One of the soldiers that was KIA was LT Daily who touched many of us. He left behind an amazing woman that he had married. She is an inspiration to many and does not even know it. We think about Mark all the time and I will never forget how he was one of the few Officers that was truly concerned for his troops and their families. It wasn't about training and the deployment as it was about the soldiers. When I first met him, he walked up to me, introduced himself and asked me many questions about my health. He then told me that he needed to know what all was going on because he wasn't one to put a soldier on the line when they had other things at home to worry about, major things like their families health putting their family in danger. He said it's better to let the soldier take care of their family for a temporary issue than it is to have them run a mission, not focused and many lose their lives. Because of LT Daily, my husband was able to remain on Rear D with me for two of the fourteen months they were deployed. I was unable to drive, on bedrest, and living with an extremely high risk pregnancy. We weren't even sure if our child would make it or not at that point and we had two toddlers that had to be cared for through all of this. I couldn't do it without my husband. LT Daily gave us those couple of months in order for us to have our son then for Kevin to go straight over. Our son was a preemie. During this time, we received the awful news that a true hero had been KIA and it was LT Mark Daily. Our lives were forever changed. We feel blessed to have known this man and for him to have impacted us the way he did. Mrs. Daily, your husband has never been forgotten and never will be. You will always remain in our prayers.

A friend of mine lost her husband in Iraq a few years ago. The day of his death was also the day of their son's birthday. Every year when Quentin's birthday rolls around, there is one thing on his mind... the anniversary of his father's death while serving our country. I believe it was last year that Quentin was one of twenty five boys that was invited to a week long camp for boys that have lost their dads due to this war. They had a week full of fun activities and time to connect with others that understand what they are going through. They were able to connect and talk. In the short film that has been released it shows some of the activities, but it also shows some of the boys talking about their dads. Quentin was the first one that really spoke up about his loss. He has two sisters that have been left behind as well. My heart goes out to the Mendez family and every other family that has been left behind. May their loved ones never be forgotten today, tomorrow, or any day in the future.   ~ To view this video, follow this link: http://www.hulu.com/watch/245282/sons-of-the-fallen.

As you all wake up tomorrow and face this Memorial Day, be thankful for all you have been blessed with. Even on your worst days, you have the world at your fingertips. Say a prayer and think about the heroes that we were blessed to know and lost. Never let their memories die. Keep them alive in the way you live life, the way you treat others, the lessons that you teach, and the memories you make.