Angry, frustrated, exhausted, confused, frightened, depressed, cautious, enraged, overwhelmed, lonely, bitter, resentful....oh how my list could just go on and on! These are just a few of the words I feel washing over me at this moment. All of these stemming from what the army and deployments have done and put my husband and our family through.

I could never put into words what this life entails and what we take on day to day. At the end of the day, I am overly proud of my husband and for all he has been through. Yet, I can't help but to hate the wars and hate the army for taking my husband away from me all of these days, months, and years and then returning him to me a man of which I no longer know. Once the kinks begin to get straightened out, the vicious, ugly cycle then repeats itself. Only the next times, they bring him home a little less of the man he was when I last saw him and said "see you later", because we never say "goodbye"...

When my husband first enlisted, he was a typical southern guy, always trying to make more and do more. Always fun, outgoing, loved to go out, and loved being around our family and friends. Crowds didn't bother him. Noises and flashes didn't leave him jumpy. Movement on a bridge and things on the streets that now appear out of the ordinary didn't leave him scanning the area. Fireworks and loud pops didn't leave him ducking down and looking for cover in fear of an RPG or mortar. Life wasn't like it is now. Now days when we go out, we are forced to sit somewhere that leaves him facing the crowds and his back to a wall. He now scans stores, bridges, and restaurants in search of any possible threats and for the closest outlets. Flashes of lights, smells, and noises bring on heavy flashbacks that bring a sense of worry upon me that I never knew 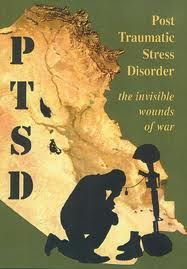 until life following deployments. Living in the desert tends to bring on flashbacks with him telling me that parts of El Paso remind him of the safe zones in Iraq. Driving down a deserted desert road and seeing tinsel thrown on two trees strike a mood that leaves him tense, scanning the desert because in a war zone that is a sign of being set up and the possibility of an upcoming IED or ambush. This isn't how life should be. My husband is all of thirty years old and has seen, faced, lived through, witnessed, done, and acted on that the majority of people could ever imagine possible. There is nothing about this life that is fair. Accidents and incidents in Iraq have left my husband with multiple physical damage that is spread throughout his body, injuries that can never be "fixed" because there is no amount of medical care to repair what has been done. Mental combat injuries from being thrown from the turret to the hell that he has had to endure and live through have left him battling Sleep Apnea, PTSD and TBI......forever. Where does it let up?

Since his TBI Psych Eval earlier in the week he has been on edge. Not once has it really let up because it brought back memories and flashbacks. This was something that no one had prepared us for or even warned us about. So, in the end it hit him and now me, like a ton of bricks. I expect days of keeping to myself and trying to control the kids because he is just having one of "those" days. I didn't even think almost a week following the eval we would still be battling it all. What also gets me is that he has had four 24 hour duties over a week and a half. Why does someone in his situation get placed on back to back duties. Why would you put someone with instantaneous changes in moods on duties that may leave them more disturbed than they already were? Why not just twelve hours at a time? Right now I feel as though I can barely talk to him and if circumstances were different, I would be furious with him. Yet, in this situation, I find myself capable of being able to handle it differently. Why, you may ask? Well, it's pretty simple. Kev signed up to protect me, our family, you, and the rest of our country. The most selfless act any man or woman can do. Even when enlisting, what he didn't ask for is this constant hell he is now forever living through and trying to overcome. In all reality, he can't help when these moods strike. He can't help when something stirs up a flashback or the feelings that rush over him. Therefore, I find it easier to contain the emotions that rush over me when it comes to him. However, at the end I find myself overly exhausted, emotional, missing my husband, lonely, and sad. I find myself longing for just a few moments of a life with limited worries. How nice would it be to only worry about material things, weekend trips without my husband or bills, rather than things that people overlook and take for granted. In eight years I have probably spent more time away from Kev than I have with him. I am turning 28 in a few weeks and have not had my husband home for one single birthday since I turned 20... Yet, as much as I want him home this year and not on duty, that just seems so trivial in this case. I just want my husband and to see him less stress, less on edge, and more at ease and enjoying the simple things in life.

I am so tired of hearing people tell me that once he is out of the army, the "old" Kevin will return. What will it take to make them realize and comprehend that the man I originally fell in love with years ago will never again be that person. He won't be the person he was before he enlisted and served his time at war... more than once. He is forever changed, which I have learned that I will always be in love with this man. Even through all the ups and downs, the obstacles that we have been pushed through, he will always hold my heart and I will always be in love with him. It's not him that will have to change from the man he has become, it is me that has and will learn to adjust and work around the changes without losing our love, and instead just gaining a more mature and understanding love in our relationship.

~ Brittney Biddle
Posted by A Southern Girl's Stand at 3:14 AM