Hard choices... being angry or being happy

First, let me start this post by saying that I'm always actually talking to myself first and foremost as I write. I'm headed toward five years of dealing with "beastie boy PTSD" and still am far from perfect at coping with it.

There's something I've been working on lately that I've mentioned here on the blog and on our Facebook page (http://www.facebook.com/familyofavet). I've been working on my attitude toward my hubby and our life together. I realized about six weeks ago that I had slowly but steadily slipped into the habit of handling every situation with sarcasm, aggravation, and general bitchiness. Basically, everything, every little, tiny, thing (and of course the not so tiny things) my husband did were making me angry and I was making no attem 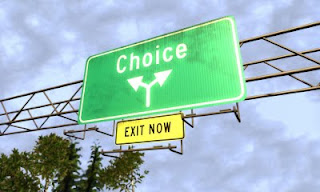 pt to control my own reactions.

I hear some of you tuning me out already :) Hold on, stay with me!!

There's this normal stage when PTSD first infects a family that the primary caregiver (typically the spouse) goes through a time where she is just simply, incredibly, and completely pissed off with the world. It doesn't mean that person is bad... they're just moving through a normal part of the process of coming to terms with a HUGE change in their life. At this point, after years of talking to thousands of spouses, I can pick out someone in this stage very quickly. And, I know if they're in that stage there are certain pieces of advice and ideas that they're simply not going to "hear" yet... they need time to finish being angry before they can move on and start coping.

So, you'd think with all of this "street sense" about living with PTSD, that I would have noticed myself somehow circling back into the angry phase... or maybe not circling back but going through a new one... but I didn't. It caught me by surprise! It seemed like one day I was coping reasonably well (and I consider "reasonably well" to be like Stepford wife perfect by PTSD standards!) and the next I was feeding into the undercurrent of hostility in our family.

So, with all of that said, I came to the conclusion that I had two choices -

(1) Keep being angry - Granted I felt like I was right to be angry most of the time, PTSD can cause my husband to say and do some pretty awful, hurtful things. I felt justified. And it felt good to "let it all out" and just loose my temper as I felt like it, telling him exactly what I thought, not mincing words, "letting him have it", blah, blah, blah. I might also be miserable, but at least I was RIGHT in my misery. I could avoid talking to my husband because I was right. Or, even if I talked to him, could keep it short and sweet, nothing extra, because I just didn't want to deal with him, because I was ANGRY and after all, RIGHT.

(2) Choose to be happy - While not ignoring any truly harmful behavior, I could choose my battles. When my husband said something that I knew came from a PTSD place, I could just CHOOSE (not always easy, but can be done) to let it go, not to react, not to have to tell him just how wrong it was. I could look at the things in my life that are good - at my daughter, at my family, at the fact that my husband did return from Iraq walking instead of in a flag draped coffin - instead of the things that are admittedly not so great. I could ignore the temptation to hold a grudge, but instead get up fresh every morning and start again.

There are two quotes that really got me to start thinking about this. One is from the Bible. It says, "The wise woman builds her house, but with her own hands the foolish one tears hers down." (Proverbs 14:1). But, even if you don't read the Bible (or just want another reference), there's another quote from William James that says, ""Whenever you're in conflict with someone, there is one factor that can make the difference between damaging your relationship and deepening it. That factor is attitude."

When I first started this experiment, I have to admit I didn't expect to see any change in my husband. I was simply trying to prevent the bitterness, anger, and resentment that was growing in my gut from taking me over. But, I've been pleasantly surprised to see my husband respond to my attitude with a new attitude of his own. Now, has PTSD magically disappeared from our household? No. Are we suddenly, blissfully happy? No. But, this is certainly a much better, healthier way to live together!

So, I challenge you to make what seems like a hard choice (but I promise will become a much easier to live with choice)... CHOOSE to be happy and not so freaking pissed off. You have that power. Believe me, if I can do it, you can definitely do it. I promise!

Brannan Vines
Proud wife of an OIF Veteran
Founder of FamilyOfaVet.com - an organization dedicated to helping heroes and their loved ones survive and thrive after combat with real world info about PTSD, TBI, and more!
Posted by Family Of a Vet at 9:52 AM