As Flashbacks Kick In

A few nights ago, K was asleep on the couch, I had a kid in the bath, one doing homework, a child playing in her bedroom, and I was sitting by myself replaying a conversation earlier between my husband and me. When he came home from work, we started casually talking about our future and what could be in store. He slowly brought up a fear....no wait, a worry inside of him that has been building for awhile now. What exactly are we going to do when he gets out. I am currently unable to work due to medical issues (Hypothyroidism ~ thyroid removed due to abundant growth and pre-cancerous cells and kidney damage due to negligence in an abdominal surgery that led to kidney failure two time in the last seven months) and have been out of work for over a year now. When I had to quit my job last year the pay cut put a major strain on our lives and finances. Over time we have managed to pick up the pieces and start putting it all back together. Even today, with me not having the ability to work, it makes things difficult at times. With this the stress comes of him working. Will he mentally be able to tolerate a new job or the people. One of the things that he has come to realize is he is very short tempered at times and that many people in general tend to be on the sloppy, unorganized, and undisciplined side. Everything opposite of what a soldier is and comes to learn. He has also been toying with going back to school. Again, can he handle this right away? What about taking a break from the chaos of everyday life? What about taking a breath from the trials and tribulations that this life has laid in front of him and us?

Today I find myself trying to sort through everything and come up with ideas. I am the big planner between the two of us, always have been, just more so since he came home in 2007. I can't help but to worry that if he jumps right back into work he will snap or have a breakdown in the midst of something. I think the reason this is all weighing so heavy on my mind today is because of an incident from last night. K came home from work in a fabulous mood and we decided to get out of the house. I needed to get out and he wanted to go walk around the outlet near us. Surprisingly, he picked up a couple shirts for himself (something he NEVER does), we picked up a few things for me from Old Navy and Aeropostale and then we headed to McDonalds for the kids to play and eat. On the way to McDonalds a wrecker ended up driving up behind us then pulling around us in order to speed past us. Normally, this wouldn't strike a reaction. In his case, it did. All of a sudden he had a look on his face that I had never seen. One that had me worried. He was scanning the cars 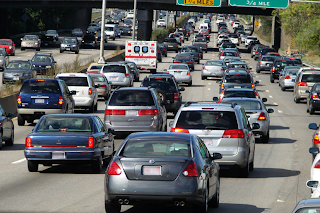 around us and the bridge ahead. The noises around him, the kids yelling, the music...all of it started to get him and he looked in a panic stricken mood. I quickly reacted and told the kids to stop talking, turned the music down and asked him what I could do. He quietly told me nothing and that he had to work through it. Once he calmed down he shakily told me that he didn't know what happened and that he felt in a sense that he was back in Iraq. He started having flashbacks that were started by the traffic on the streets, the lights flashing on the wrecker and certain noises. All compiled together and he felt himself beginning to freak out. I have never seen this happen in this way and I have seen the flashbacks occur. I can't seem to shake what I witnessed.

After last night I am now wondering if he can handle going right into work upon being released from the Army. I now feel more concern about how the near future will affect us. I now find myself wishing I could just go back to work making what I was making, contributing to my family and our finances and future. I want to take the stress off of him. I hate seeing him as he was last night. That condition that he falls into finds me trying to pick up the pieces and to make it all better. Yet, I can't just make it better and it brings me down knowing this. I can't just make it stop. I can't make him feel how he did before the deployments came into our lives. I feel lost.

I have people asking me how can it possible be so bad. I know the ones that do not understand the depth of the war or who are not living this life first hand have no way of knowing the extent of it and what the duties entail. Yet, I find myself just wanting to shake these people and just make them realize PTSD is no joke and is one far from easy to deal with at times. At night I don't sleep like I use to because I watch him as he battles nightmares, tosses and turns, and turns his pillow over multiple times from the sweat. Will it ever get better? He takes over seven pills a day for his PTSD and three nerve blockers for the damage done to his back. Of course, aside from those, he has more. When he misses a couple during the day I can tell a difference, if he misses a day or two total, I cringe. The days can be miserable and he will be short with everyone and everything. Not only has the deployments left him with all the terrible memories and battles, but it has also left him almost dependent on numerous pills. Yes, he was on his meds last night when the flashback occurred. Back to the original reason I started this post, will employers really take the chance in hiring someone in his condition? Mentally and physically beaten. Physically he cannot do much at all either. He has a permanent profile right now that the only thing checked off as yes, is where it asks if the profile is permanent. He can't do anything... it even states that he cannot raise his arms above his head, can't sit or stand longer than his body can allow, no more than 12 hours in uniform and boots, to shave as needed due to cancer caused from deployments... the list goes on and on.

With everything that has been experienced, I feel overwhelmed in a sense. I know in the end it will come together, it always does. But, I can't help but to feel a lot of "what if", "what do we do", "what can he truly handle", "what about his well being"... my list just goes on and on.

As always, we keep fighting and move forward. We make things happen and we see the light at the end of the tunnel. We find the silver lining. He keeps pushing, I keep pushing, WE keep pushing forward. We set goals and make them happen. All through this, we give ourselves the reasonable time frame to meet them knowing that things may take a little longer than before. We have made it this far and even with the setbacks, we will make it further. One step at a time never taking anything for granted.

~Brittney Biddle
Posted by A Southern Girl's Stand at 12:14 AM