My heart goes out to this Veteran and his wife. Our family was once in a dark, desperate, PTSD hell. Our story was not the same... but I remember the pain of that feeling of being so alone and confused and unsure of what I could possibly do to save my marriage, my family, or my husband. Matter of fact, FamilyOfaVet.com, was started because of that dark, lonely place. It was started to (hopefully) be a beacon of hope and help to those in need. I'll be responding to this Veteran's wife with some ideas and aide tonight and then will post some on the blog tomorrow. If anyone else has some ideas, I'm sure she'd love the help.

“It's a fairytale!” was how my friend described our love story when I told her how we met. We met ten years ago and at the time I was in a relationship. Nothing ever happened between us then. We kept our feelings to ourselves. Then our paths crossed again and it was like conversation never stopped. But he was in a relationship. So, yet again feelings were kept silent - but your mind and your heart has a way of keeping it in the back, nicely tucked away. We kept in contact for a short time, but it was as if we just decided it could not be. Five years went by and one day he was back.

This time we both decided there was no way we could let this chance get away! We carried on as if we had ne 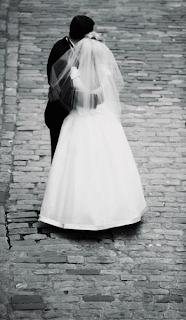 ver been apart – we never stopped talking… endless conversation, laughter. Finally, I’d found my soul mate and best friend. He popped the question and of course I answered, “Yes! Yes! Let’s do it now!”. So we drove to the nearest place where we didn’t have to wait and we got married.

It was the best day. I was on a high that I couldn’t begin to describe without smiling from ear to ear. I couldn’t believe how happy I could be.

Then PTSD began to creep in. It started with anger towards crying babies at the store and being unable to sleep, pain, drinking. Although he was getting help, it was just him saying what he thought they wanted to hear or just enough to get the attention that was needed (band-aid treatment). I encouraged him to really talk to someone, but he would tell me he didn’t want to talk about what he did in Iraq. Then his therapist started with his childhood and blamed his parents. He started working with a work program at the VA and it all started to really go south. He was harassed by two female employees to the point he was watched at all times and no one would help or be on his side. He ended up losing job because they said he had to take care of his PTSD and he had just started taking meds for his PTSD (for nightmares, depression, etc). He lost trust in his doctor because he felt everyone was judging him about what he had shared with his doctor by reading his files.

Then, the VA sent him a letter stating he needed to check in with the VA police every time he came to the VA because of his disruptive behavior. Yet they have NOTHING documented - no outbursts, no threats, no acting out. The patient advocates have yet to give him answers as to what they mean by disruptive behavior. Two police chiefs reviewed the reports and stated it was harassment by these two women, yet nothing was done. In the place that he was supposed to feel like he could get help, he has been made out to be the bad guy. It’s unreal.

So it’s been 6 months since we got married and I feel I don’t know the person I married anymore. He no longer talks. I might as well talk to the wall, because I will get a blank stare or “no,” “yes,” or “I don’t know” for answers. He is forgetful. Sleep is either induced or none at all. He’s up all night watching TV. He might not eat or just eat everything in sight, hiding his drinking then all he does is sleep .

I am so angry I could spit nails and ready for divorce as I feel I am doing it alone. Finances are to the bare minimum as I am the only one with a job. I am emotionally drained. I know it’s not me and all he can tell me is I didn’t mean to hurt you. I have reached out to the military ministry, church yet I can still see how hopeless, helpless he feels. So the blessing I felt when I came up on this site… just to read & vent. Thank you. I could go on and on, but just being able to write has helped me calm down and know I am not alone. Thank you again....

Email ThisBlogThis!Share to TwitterShare to FacebookShare to Pinterest
Labels: PTSD