How Dan and I are surviving Vietnam and PTSD

PTSD, unfortunately, doesn't change. In the years since Vietnam and in the years to come, our heroes and their families continue to struggle. PTSD spans every war and every branch of service. Hopefully, though, we will find strength in each other, the knowledge that we're not alone, and the ability to learn from the experience of those who have gone before us. Thanks, Barbara, for sharing your story!


I have been married to Dan for almost forty two years, while every one was getting married to avoid the Vietnam war we were getting married because he was leaving for the war. Dan was in The United States Coast Guard, you may not know the Coast Guard does not serve in the war unless they volunteer. He thought it was the right thing to do and I think he was right. I guess you could call me a real war bride, we were married two weeks when he left, he arrived home four days before our first anniversary. This wonderful young man and my husband came back broken. The next forty years of our lives would be nothing like we had planned. You see Dan has PTSD and it changed our lives forever. While Dan was in Vietnam losing his friends to the terrible war, I lost our first child,the doctor said my nerves aborted our child. The loss for both of us was immense. We tried with all of our hearts to make a normal life for ourselves, however it just was not to be.

Dan had and still has horrible nightmares, night sweats and out bursts. No one knew what PTSD was until the '80's (shell shock, battle fatigue, you know) and as most wives, I made excusses for him. I tried to make sure everything went his way (don't make waves I thought), whether it was right or not. One of the things I tried to do was make every thing perfect, the children neat clean and tidy no loud noise don't want to upset Daddy, including my house. Nothing could be out of place because if I could not control my life I could at least control how it looked to others.

Dan drank so much more than he should have, so much more than normal. He would stay out until all hours of the night and into the morning. He had affairs, he struck me, lied to me and the list goes on. Now I bet you are saying WHY did I stay with him. The answer to that is not an easy one, sometime it was because I thought I had no where to go with three little ones, other times it was because I knew he needed me to help him, some times I thought I could fix him but most of all I loved him.

Dan tried to kill himself more than once, I cannot tell you, even now, how it breaks my heart to think of it and to worry it could happen again at any time. I could go into all of the horrible details, however if you are reading this, you are most likely experencing alot of the things I have. I only hope this helps you in some way.

Men and women with PTSD seem to just slide through life with ups and downs until one day something drastic happens to knock them right off of thier feet. We had a number of these in one year. Our baby was seventeen and became pregnant, not really a bad thing, however her baby was born very ill. Five months later I walked down the isle with my beautiful grand daughter in my arms to watch her Mommie and Daddy marry. That was October of '96. Things were good, yes, they were. December of that year Samantha (my grand daughter) had her heart rebuilt at The University of Michigan Hospital and God let us keep her, good again. June of '97 my husband was down sized from the job he loved and worked for many years, not good. He went into a great deperssion. He then went through many jobs, not one seemed to be the one he wanted, he could not keep a job for long, not good again. Now it is December of '97 the 20th. yes five days before christmas and our house burned down a total loss. My oldest daughter took us in for the Holiday's, you see our other two daughters, one daughters husband and our wonderful Samantha were visiting from VA. It was by far one of the best Christmas's I have ever had, we were all together and safe.

If it had not been for Dr. Martis and the VA Hospital in Ann Arbor Michigan I am sure Dan would not be here today. In and out off the mental wards , thirty five days at East Chicago PTSD clinic, twenty one days at Battle Creek PTSD clinic and the list goes on. In 2007 my mother died, Dan loved her with all of his heart,the day we burried her we lost Dan in a way too. The sheriff's department came and took him to a safe house, I was all alone - Mom was gone and they had taken Dan. Secondary PTSD came up with a vengence. Some of the medical society has a problem believing that we could have such a thing, well it is here and in full strength.

I am trying to heal by helping others I am going to speak at The VA hospital in Ann Arbor about PTSD, Secondary PTSD and what signs to look for in your spouse or partner to keep him or her safe. I also am one of the directors of The Arms Forces and LEEF a program started by a wonderful woman here in Ohio, we are going to have group meetings starting in September for the spouses and partners of veterans to hopefully help them work through some of their problems. As we can not cure them (there is no cure) we can listen and help them to release some of the fears we are all holding.

Dan and I are taking our time trying to heal, Dan is now after trying to convince the VA that he can no longer work retiered 100 percent. It took us a long time. You see it seems that if you are sick or not, to hold a job, stay married and dress like a business man you must not have PTSD. BUNK! After he was almost sixty years old we convinced the Social Security Department also he was not trying to scam them. Please don't give up your battle, for, and with your husabnd or wife. The road is long and hard and really never ends. How do I finish this story, with the hope that if I have helped you to understand in any way, if I have done this then I am on the right track and I too am healing.
Posted by Family Of a Vet at 8:55 AM 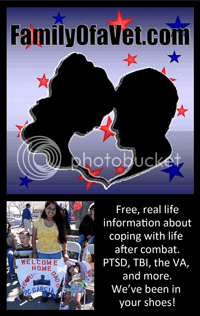